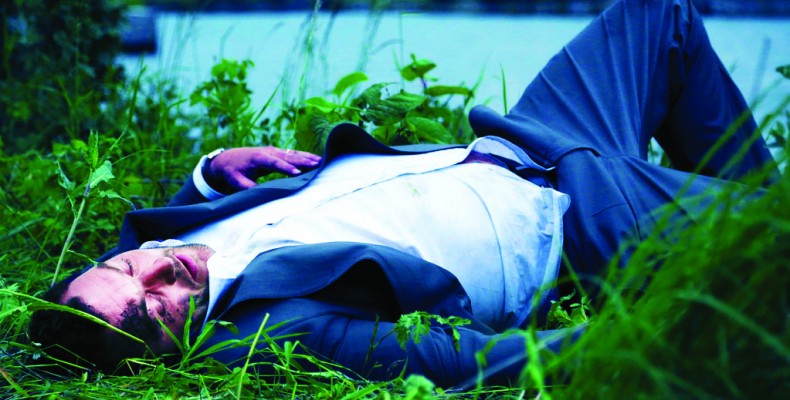 “Ablations” is a black comedy full of surrealistic departures and stunning art direction unmotivated by its plot, begging the question “but why?” to which director Arnold de Parscau seems to shrug, “why not?”

Benoît Delépine (“Avida,” “Aaltra”) wrote the screenplay and builds a navigable mystery in the first act. We’ve got an event that can’t be explained, a detective, and clues to work out. The details being a man (Denis Ménochet) who frantically retraces his steps after waking up on a riverbank with no memory of the previous night and realizing his kidney has been surgically removed.

But while that’s a compelling enough set-up, the intrigue quickly dissolves when it comes to Delépine’s flimsy use of the rest of the “mystery story” mechanics. See, where the story would typically now advance to the introduction of possible suspects, motivations, and red herrings, “Ablations” reveals the “who” of the “whodunit” 20 minutes in. With the cat out of the bag, the only element left from which the plot can advance is the motivation, the “why.”

Of course a singular functioning element is not enough to fuel a feature film, so a few different approaches are used to lengthen the runtime and increase the tension. The first is a marital conflict as Pastor, our unknown-medical-patient, dodges the suspicions from his wife (Virginie Ledoyen) who he refuses to tell about his predicament. Having to rationalize his strange behavior somehow, Pastor’s wife assumes he must be engaging in an affair. Which makes a lot of sense seeing as Pastor seeks out a medical doctor who happens to be his ex-lover (Florence Thomassin) for advice. This triangle of assumed adultery and genuine romantic tension is a functioning dramatic time-filler, but a real distractor from what should be the strongest component of “Ablations” – the mystery.

Further (but to greater successes) de Parscau, as a first-time feature director, indulges in a slew of camera tricks, fantastical production design feats, and surrealistic weirdisms. There’s an intense Hitchcock zoom, an underwater operating table, and a shot that pushes into an extreme close-up of Ledoyen’s eyes while she sits in one setting and pulls back to reveal her now in a completely different one. These moments all give de Parscau and his film an aesthetic identity, but where’s the motivation? Our character isn’t an addict or mentally ill, and while some of them occur while Pastor is dreaming, there’s still not a strong explanation for the place of these delusions inside a thriller that’s otherwise set in the real world.

Getting past the screenplay for a moment (as hard as it may be), Denis Ménochet is at least the right choice for the role. He was first seen by American audiences opposite Christoph Waltz in the infamous opening scene of Tarantino’s “Inglorious Basterds,” and then later in the fantastic Oscar-nominated short “Just Before Losing Everything.” He’s an actor that can get hired off his “pensive look” alone – what a great face to watch performing. He deserves a top rate thriller, and I think we’ll get several as his career in France progresses. A shot of his face being slowly revealed as the steam dissipates from a bathroom mirror says it all: whether he’s in deep thought, angry, or confused, it all comes straight through in his eyes.

“Ablations” may not break much new ground in the thriller space, but it has a lot of great ideas just begging to be tied together into one incredible, scary package. With this type of confident direction, I think de Parscau will get there.

Taylor is a Chicago-based writer and aspiring film historian. He is the editor here at TFP, and has contributed to a number of international publications such as Cinema Scandinavia, PopMatters, and Room 101 Magazine. He can also be found listening to podcasts, researching topics he has little use for, or running after a city bus.
You might also like
ciff 2014Denis Menochet

END_OF_DOCUMENT_TOKEN_TO_BE_REPLACED
Taylor Sinople Picks: The 16 Best Films of 2016
Form and Function in Alex Ross Perry’s “Queen of Earth&...
Digging for Fire and Unexpected: Husband and Wife Process Parenthoo...
Every Thing Will Be Fine 3D Review