With the 49th Chicago International Film Festival coming to a close, we’ve ran out of chances to catch the independent and foreign films that will define the next year of cinema. Each year, some of my very favorite art-house films turn out to have screened at CIFF the previous year. With over 180 screenings at the festival, all we can do is our best to predict which films will secure distribution and play for audiences around the world. Here’s our favorites from this year’s CIFF:

“Blue Ruin” is an uncommon take on the revenge thriller that finds itself more interested in the aftermath of the act of revenge than the journey to fulfill it. The allure of this dark, minimalist gem is something that’s all too rare in independent cinema today – a strong point-of-view character.

“Stray Dogs” is recommendable to almost no one. It’s perhaps the slowest-moving film I’ve ever seen. But, those with the patience and hardcore interest in pure cinema will find Tsai’s masterpiece to be one of the most challenging, painful, and ultimately rewarding experiences in observational filmmaking.

How to See It: Currently only on the festival circuit. Theatrical release TBA.

Shot in secrecy with a barebones crew in the director’s own home, “Closed Curtain” places the viewer firmly in the confinement of artistic oppression from the first frame. The sea is viewed from behind the bars of a security fence as a taxi arrives to drop off a man with a duffel bag. Looking out from the barred window, we watch him wind his way up the front drive and enter the home before sharply closing thick curtains on the glass – the first taste of the blend of literal and figurative poeticism Panahi aspires to create with this fictional-documentary reality-bender.

How to See It: Currently only on the festival circuit. Theatrical release TBA.

Equal parts police procedural, horror-comedy, and pitch-black fairy tale, “Big Bad Wolves” tells the story of a suspected killer and the men that kidnap him to extract a confession – by any means necessary. 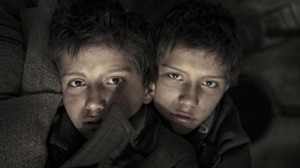 Twin boys living in Hungary are left with their barbarous grandmother in the midst of World War II. As Hungarians, this isn’t a story of children hiding from the Nazi’s and escaping battle. Their ability to survive the war has nothing to do with the threat of a bullet but of starvation, cold, and capture. Food shortage, little money, and the harsh winter.

Director Janos Szász achieves a great pacing with this one, patient enough to allow you to soak in the atmosphere, but nimble enough to sidestep any downtime. You don’t often come by such an effortless achievement in which so many moving parts run perfectly in sync.