Features
2
0
previous article
Review: The Double
next article
Chicago Critics Film Festival 2014: The One I Love 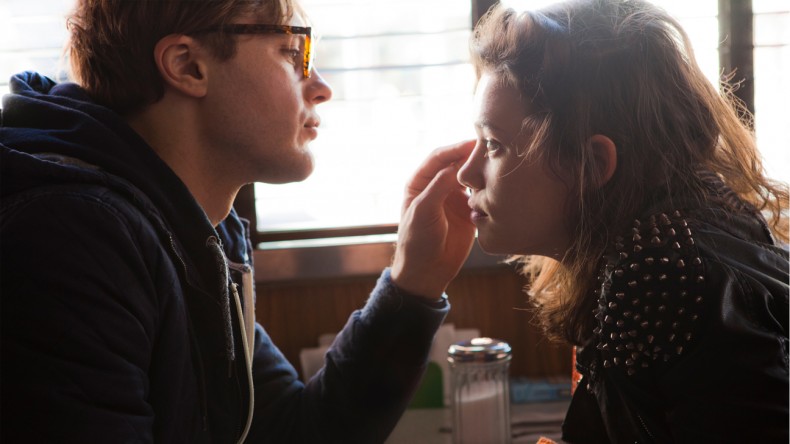 Moving and intellectually stimulating, "I Origins" succeeds as a low-budget sci-fi with big emotional pay-off.

Can a single pair of eyes change everything? Dr. Ian Gray (Michael Pitt), a molecular biologist whose life’s work has been dedicated to studying the human eye, tells us so in the first moments of “I Origins.” He’s speaking from the future though; after he has already met girlfriend Sofi (Astrid Berges-Frisbey) and sharp-witted lab partner Karen (Brit Marling), after he advances scientific proof of evolution, and after he stumbles upon a link between the human eye and personal identity that could alter the world’s conflicting perceptions of the often opposing forces of science and spirituality.

Filmmakers Mike Cahill, Zal Batmanglij and Brit Marling have been collaborating in various combinations on low-budget, high-concept films for years. The three lived together while writing and developing two 2011 films – Cahill’s “Another Earth” and Batmanglij’s “Sound of My Voice.” Batmanglij and Marling went on to do activist-thriller “The East” in 2013, and now Cahill directs “I Origins.” By now, the cotorie has proved their brand of slightly-surreal dramas and is able to carry the credibility that led the Chicago Film Critics Association to book the film for the festival sight unseen, based on positive hype coming from Sundance.

That act of good faith paid off when the credits rolled and “I Origins” received the only outbreak of unprompted applause of the handful of features I saw at the festival. And it’s difficult not to be enthusiastic when a film closes on a well earned and outstandingly moving emotional crescendo set to Radiohead’s “Motion Picture Soundtrack.”

Ian Gray’s obsession with the human eye begins as a habit of taking photos of interesting eyes he sees on strangers. This is how he meets Sofi – a spiritual woman with whom he falls in love with despite their different perceptions of the afterlife. Gray has incorporated atheistic beliefs into his career, and he sees his studies on the eye as a crucial key to disprove the existence of an intelligent designer by tracing the evolutionary development of optical systems – effectively tearing down the tent-pole argument that asserts the human eye to be too complex to have possible been naturally evolved. His lab partner, Karen, explains it in a more approachable way: if there are twelve stages of evolution between the least developed organism’s eye and a human’s eye, then they are searching for stage zero: the origin. Find an organism with no sight but the gene to develop it, and you’ve knocked down a fundamentally contested challenge of evolution.

Cahill (who wrote and directed the film) staves off the iffy science behind something like the final third of “World War Z” by finding a real sweet spot between both allowing the biologists to speak realistically, and letting us in on the thought processes. It makes you feel smart – Cahill empowers the audience, and the film is alive with the thrill of scientific discovery, the satisfaction of briefly becoming, as Karen says, “the only one on Earth to know something.”

Cahill’s film amounts to much more than its reductive, trend-driven title. A few especially convenient coincidences put some stress on the screenplay, but suspension of disbelief is what it’s all about. Ian Gray is grappling with revelations that ignite in him a tug-of-war between truths and untruths he has accepted for his entire life: science and spirituality, proof and faith. These hard-opposites become fluid in the third, India-set act. As that aforementioned pair of eyes lead Gray around the world, he poses questions that aren’t often explored in cinema. A brief epilogue that appears post-credits only serves to further the implications of pushing science in new directions. “I Origins” is a cool and stirring piece of science fiction with no more special effects than a great indie romance, yet it’s just as moving as one.

Taylor is a Chicago-based writer and aspiring film historian. He is the editor here at TFP, and has contributed to a number of international publications such as Cinema Scandinavia, PopMatters, and Room 101 Magazine. He can also be found listening to podcasts, researching topics he has little use for, or running after a city bus.
You might also like
brit marlingsundance

by Taylor Sinople on April 29, 2013
At what point do “up-and-coming” artists become established? It’s often difficult to pinpoint, even in retrospect. One moment, they’re making “promising” work, but before you know it you hear from them as an authority, or you don’t hear from them at all. When did Stanley Kubrick become something more than “someone to look out for”? […]
Comments
Leave a reply
Add Comment Register

END_OF_DOCUMENT_TOKEN_TO_BE_REPLACED
Taylor Sinople Picks: The 16 Best Films of 2016
Form and Function in Alex Ross Perry’s “Queen of Earth&...
Digging for Fire and Unexpected: Husband and Wife Process Parenthoo...
Every Thing Will Be Fine 3D Review