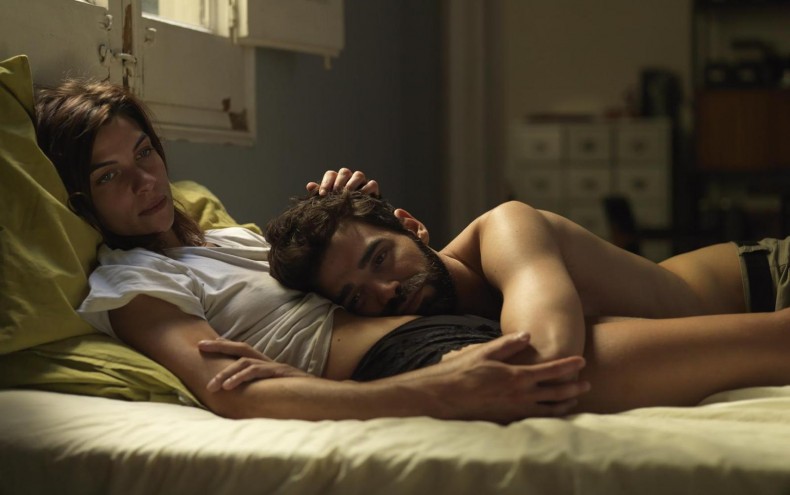 Long distance relationships have seemingly become more viable every decade of the last century as the power of telecommunications (seemingly) draws people together. The monthly letter, the weekly telegram, the nightly phone call, the daily email, and the hourly text message. Then: webcams, Skype, FaceTime, anytime, anywhere – press the button, see your lover. How could you feel distance when you can be that close?

Before ten thousand kilometers of land and sea separate Alex (Natalia Tena) and Sergi (David Verdaguer), we first meet them in their bed one morning in Barcelona. They’re having passionate sex, trying for a baby. Afterwards, Sergi prepares breakfast while Alex receives an email that will change everything. She’s been offered a year-long artist residency in Los Angeles. He says, “you can’t go,” but knows that she must. She, too, knows that this opportunity is the “last train” for her photography career. So she goes, and Alex and Sergi become two people in two apartments, left with the blessing and burden of technology to keep them together.

It’s probably reasonable to guess that director Carlos Marques-Marcet has some experience with long distance relationships. Before “10,000 km” (his debut feature), he shot the story as a thirty-minute short titled “Same Place, Same Time.” Two years before that, he completed “5456 Miles Away,” another short. Marques-Marcet has spent some time thinking about technology and romance, and with this expansive, 99-minute exploration of a couple’s shaky relationship, he proves that these are ideas worth thinking about.

Alex and Sergi’s comfortable domesticity is established in the film’s daunting 25-minute opening shot. This is your chance to be sucked into the film, if you ever will be. The focus puller does one hell of a job at managing the reframing as the camera follows the couple as they make love, shower, and eat breakfast, all the while carrying on conversations in this single take that offers close-ups and smart wide shots without a single edit. In a delightful capsizing of this initial technique, the film following the opening shot is broken up into a series of very brief vignettes that allow us to rapidly pop into Alex and Sergi’s lives after she moves to L.A. Think “500 Days of Summer:” a title comes on screen at the start of each snippet to establish how long they have been separated. Day 17. Day 84. Day 116.

At first, our access to their lives is limited to their interactions via video chat. Their unique methods of holding on to some form of intimacy despite their distance provide a lot of warmth to the picture. They stage a formal dinner date and sit at their dining tables across from the computer.  But the longer they’re away from one another, the more the identity of their relationship withers. Slowly, the story of Alex and Sergi is overtaken by the story of Alex and her photography. As her year-long project takes shape, it begins to reveal the emotional weight of her choice to come to America.

Cinematographer Dagmar Weaver-Madsen impressively choreographs the complexities of shooting a romance anchored by technology. We see everything – computer screens, photographs, webcam feeds – it’s all brought directly onto the screen. But for all the technical prowess exhibited in “10,000 km,” it’s still a definite watch-checker. South by Southwest awarded the film an award for Best Acting Duo in 2014, but while Tena (Nymphadora Tonks in “Harry Potter,” and Osha on “Game of Thrones”) and Verdaguer perform well and deserve recognition for their carrying of this two-person drama, it can’t be avoided that they are a pair of very dull characters.

Have we been spoiled by larger-than-life characterizations? Alex and Sergi feel at times too real, like the arguing friends that you wish would handle their business in private. So while this minimalist piece doesn’t need to go so far as incorporating a kind of Manic Pixie Dream Girl, both characters, with a hundred minutes to spare, still should have ended up a bit more defined and memorable. Read as a film essay on ultra-contemporary romance, “10,000 km” is an important dissertation. Just don’t expect this good-but-not-vibrant film to be a hit on date night.