Features
1
0
previous article
A Fresh Look At: The Descent (2006)
next article
Review: Interstellar 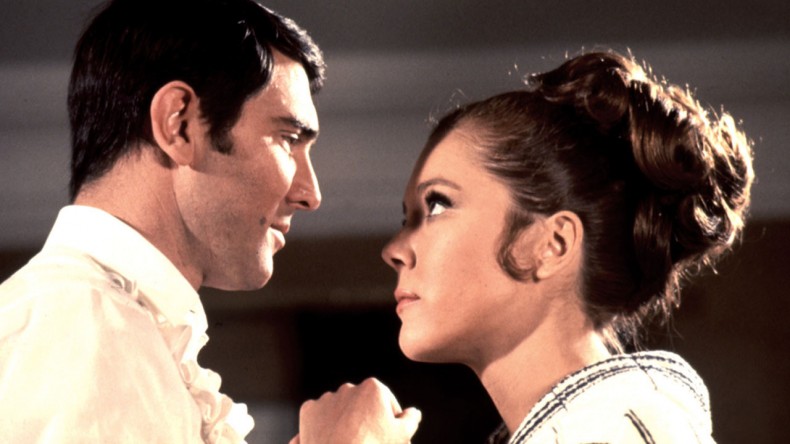 “On Her Majesty’s Secret Service” makes it easier to continue on an adventure with Bond.

Our journey through Bond films takes us to the first film without Sean Connery, and the only film to star George Lazenby. While the next film will present a perfect opportunity to reflect on Connery’s tenure as 007, “On Her Majesty’s Secret Service” and the change of face does present a welcome – albeit jarring – shift.

George Lazenby isn’t bad. He definitely lacks Connery’s presence and ability to pull off swagger and bravado. Lazenby looks far more at home masquerading as a professor than wooing convalescent women, though it’s hard to fault him for having a different approach. He seems much more enthusiastic about being Bond as well, choosing to drop everything and chase Blofeld (Telly Savalas) at the first opportunity, as well as taking on the “Taming of the Shrew”-esque task of convincing Tracy (Diana Rigg) to marry him. He is a Bond more willing to commit, but also more willing to flit from task to task. Lazenby isn’t a bad Bond at all, and I suspect that if the audience were exposed to more of him, he might be better and more fondly remembered. Alas, there is no more Lazenby.

However, this is a good opportunity to reflect on one of my favourite characters of the series, Miss Moneypenny (Lois Maxwell). She is, as always, spectacular, though one gets the clear impression that she is not taking the change in Bond in stride. She lacks the same charisma with Lazenby that she had with Connery, instead seeming more awkward and unsure of herself. This could be interpreted as a shift in her relationship with him – especially given the events of the film – but Moneypenny is above that. She is clearly untouchable and indomitable. In “On Her Majesty’s Secret Service,” though, we see her fairly exposed, making the character all the more wonderful. Rather than being an object of sexual pursuit like every other woman Bond happens across, Moneypenny is more akin to his guardian angel, looking out for him, but still willing to chide him when the opportunity presents itself. She seems to define why it is that Bond is still working for the Secret Service, even when both he and his superiors seem to despise each other. It’s something that must be admired, and it makes Moneypenny by far one of the best characters in the series.

However, as much as I may wish it, “On Her Majesty’s Secret Service” is not a film about Miss Moneypenny and her adventures. It’s a film with one subplot reminiscent of “The Taming of the Shrew” and another subplot reminiscent of “Where in the World is Carmen Sandiego?” The two come together awkwardly, if at all, and more often than not, one seems to be dropped in favour of devoting time to the other. Neither is terribly interesting on its own, with the search for Blofeld coming off largely as a repetition of older, better Bond films, and the Tracy subplot being more than a little awkward to a modern audience. However, somehow the combination of the two and the slight change in the formula makes the film one of the more watchable since “Goldfinger.” While it’s not terribly good, it is different, and Lazenby can often be fascinating to watch.

What makes the film shine, however, is its ending. At the risk of revealing it – even a forty year old film can have new viewers, as I like to think I demonstrate – it is unexpected and beautiful. It is the perfect collision between the Blofeld and Tracy plots, and while it does come off as comical, it also succeeds perfectly in creating a resolution to one plot and to Lazenby’s tenure as Bond.

Also well-worth mentioning is the opening musical number. While this particular song has no lyrics, the tune is decidedly more fun and memorable than some of the previous ones. While there are baffling changes to the opening theme, the theme song itself is good. The Louis Armstrong song within the film, though, is another matter entirely, being one of the few aspects of the film that can honestly be called horrific.

Really, though, “On Her Majesty’s Secret Service” is a welcome shift for the series. While it isn’t terribly exciting or interesting, the new perspective on Bond and a new kind of adventure for him make it more compelling and more memorable than the previous two films. Lazenby, too, makes a fine Bond, and I wish he’d been given more than a single film to work with. All told, it’s not a bad film, and it certainly renews my faith in the series. I look forward to the next film!

Janneke Parrish lives in South Korea where she struggles to order pizzas and consoles herself by watching far too many movies.
You might also like
Bonding with Bond

END_OF_DOCUMENT_TOKEN_TO_BE_REPLACED
Taylor Sinople Picks: The 16 Best Films of 2016
Form and Function in Alex Ross Perry’s “Queen of Earth&...
Digging for Fire and Unexpected: Husband and Wife Process Parenthoo...
Every Thing Will Be Fine 3D Review