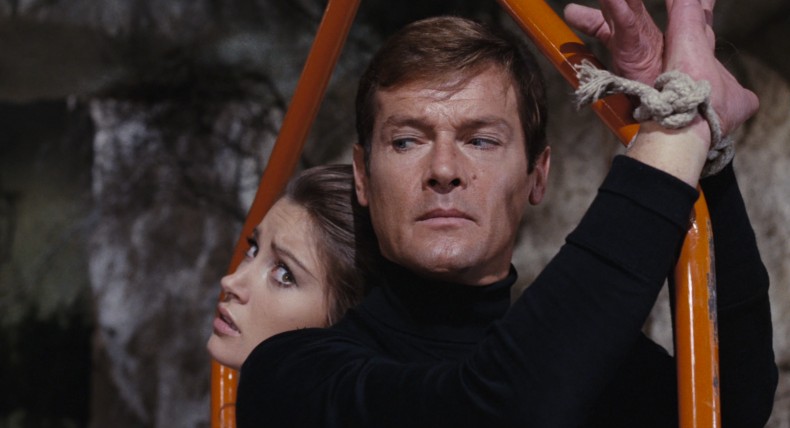 “Live and Let Die” is a film better left to die.

Our journey through the Bond films takes us at last to a new Bond actor. The era of Sean Connery is over, and we are introduced to Roger Moore in “Live and Let Die.”

It’s with the introduction of a new and radically different Bond that what made Connery shine becomes apparent. When compared with Connery, Moore is stuffy and polite, once again, nowhere near as convincing an improviser as Connery. With Connery, off-the-cuff one-liners and seat-of-the-pants plans seem to be part of a grand plan. He is a Bond that is both suave and professional, while seeming like neither. He comes off as a Bond that could actually be a superhuman spy.

Roger Moore comes off as the type of Bond who would see wandering into Harlem for a spot of tea as a good idea. “Live and Let Die” does not give off the impression of Bond as an intelligent, superhuman spy. Perhaps I just miss Sean Connery too much, though.

The plot of “Live and Let Die” follows Bond (Roger Moore) as he investigates the deaths of three MI6 agents. What he finds is a conspiracy by the director of the island of San Monique, Dr. Kananga (Yaphet Kotto) to distribute heroin free of charge to people, thus getting him a monopoly on heroin and allowing him to set high prices for the drug in the future. Bond also meets and befriends Kananga’s tarot card reader, Solitaire (Jane Seymour), further complicated Bond’s relationship with Kananga.

To call this film racist would not be a stretch as such. After all, almost every black person Bond meets is part of an apparent universal black conspiracy to kill Bond and distribute heroin. It has more than a few unfortunate implications about the state of race relations in America in the 1970s. The various caricatures that Bond encounters along the way – such as the recurring taxi driver who speaks only in Jive – only seem to reinforce these negative racial stereotypes and drive home an idea of blacks as a unified “other.” However, it’s also important to note that “Live and Let Die” was not the only film expressing these sorts of thoughts at the time. It’s abundantly clear that “Live and Let Die” is deriving much of its plot and themes from the genre of Blaxploitation, a genre that specialised in creating and popularising many of the types of characters and caricatures seen in “Live and Let Die.” It raises the always interesting question of whether or not something can really be considered racist when racism or commenting on race is the underlying ideal. “Live and Let Die” is drawing from a popular genre, one founded on what from the outside appear to be rather racist tropes.

Is it racist for the film to keep using them when it’s borrowing from a genre in the context of which they are not racist? It’s a difficult question. My inclination is to say yes, that “Live and Let Die’s” use of black caricatures and the tropes of Blaxploitation films is racist. It is based – as so many Bond films are – on mocking whichever group happens to have attracted the film’s ire. In this case, that involves creating a universal black conspiracy, something which, especially given the context in which the film was made, smacks of poor decision-making on the part of the film-makers, at the very least. When taken out of a self-referential context, the tropes that define Blaxploitation are racist, and “Live and Let Die’s” use of them, well outside their original context, is racist.

There is, of course, more to the film than the liberal borrowing of Blaxploitation tropes. However, because it does make up so much of the film, it must be commented on. Beyond this, though, the film is not terribly noteworthy. The main plot and villain are laughably bad with the villain’s flawed understanding of economics destroying any tension the film might have built up. When the consequences aren’t particularly terrible, it’s difficult to understand why the audience – or indeed, 007 – should care. The action scenes, too, are not terribly spectacular. The one exception is the boat chase through Louisiana, which sometimes becomes so incredibly laughable that it’s difficult to believe that it’s not secretly a parody of itself. Much like in “Diamonds are Forever,” some aspects of the film are so laughable that it’s easier to believe that they are satirical than it is to believe that someone thought they were a good idea in a serious action film.

The opening song is, of course, fantastic, and is definitely one of the best of the entire series. Paul McCartney delivers a stellar performance. What is less stellar, though, is how it’s repeated throughout the film, regardless of whether or not it actually fits in a particular scene. Indeed, the incidental music is fairly terrible throughout, sometimes being distracting from the scene itself. While it’s nowhere near “Thunderball,” the incidental music does leave quite a bit to be desired.

The Bond girl of this film, as well, leaves something to be desired. While Seymour’s performance is fine, she and Moore lack chemistry or believability, making the romance seem forced at best. Indeed, Bond’s use of a loaded tarot card deck to sleep with her serves as the perfect analogy for their relationship – it’s there because the script says it’s going to be there, not because of any real desire on either of their parts.

On the whole, the best part of “Live and Let Die” is the opening song. The rest of the film is largely forgettable, if not flat-out offensive at times. While Moore doesn’t do a terrible job as Bond, he lacks the same charisma and on-screen presence of his predecessor, making an already bland plot even more stale. I can only hope that his films improve, but to be honest, I have my doubts. Still, we’ll continue on, and hopefully see something new and exciting from Roger Moore.

Janneke Parrish lives in South Korea where she struggles to order pizzas and consoles herself by watching far too many movies.
You might also like
guy hamiltonRoger MooreYaphet Kotto

by Janneke Parrish on December 8, 2014
“The Man with the Golden Gun” probably would have done better with a golden writer.

END_OF_DOCUMENT_TOKEN_TO_BE_REPLACED
Taylor Sinople Picks: The 16 Best Films of 2016
Form and Function in Alex Ross Perry’s “Queen of Earth&...
Digging for Fire and Unexpected: Husband and Wife Process Parenthoo...
Every Thing Will Be Fine 3D Review