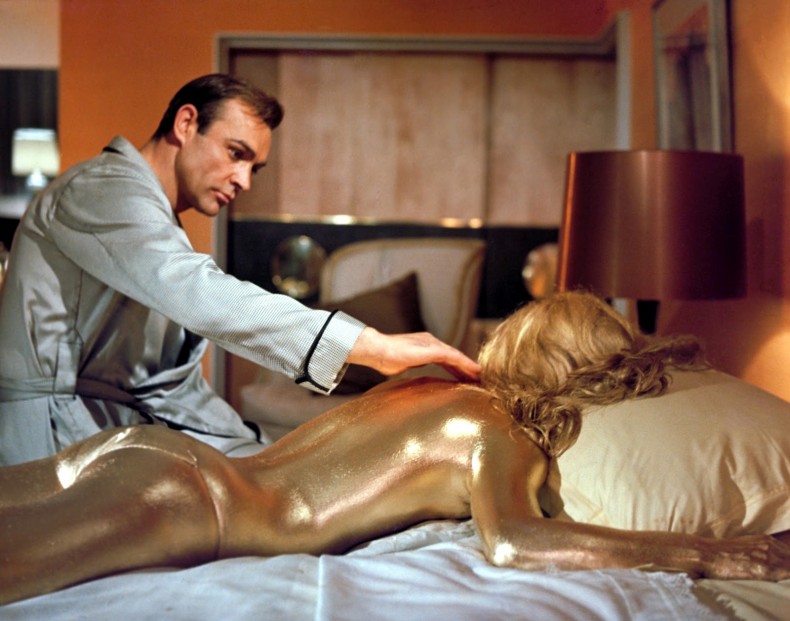 “Goldfinger” promises a web of sin, and delivers, though perhaps in more ways than it intended.

“Goldfinger” represents the first of my rewatched Bond films, and I must say that I wasn’t terribly looking forward to it. My first experience with it was one of disappointment. Happily, a second watching made it substantially better, though it raises all sorts of other questions about what I, as a film reviewer, am meant to do. When I write a review, how much of my thoughts are meant to be communicated? How much of me should be in the review?

To clarify, “Goldfinger” is by far the best-made Bond film I’ve watched thus far. It represents a definite step into what we think of as James Bond. The opening scene is one of the best I have seen in action films, and the opening credits, too, feature a wonderful, timeless song and visuals to match. There are gadgets galore, offering ways for Bond to escape even the nastiest of predicaments. Even the villain is more recognisably Bond-y, diverging from some international mastermind to a thief with an improbable laser and one-liners out the wazoo. All of it is rife with what I think of as Bond-isms – things that make Bond, in the cultural eye, Bond.

This also represents a major divergence from Bond as an everyman – or as close to an everyman as he was ever going to be – to more of a superhero figure. From the very introductory scene where Bond sees an assailant through the reflection in a woman’s eyes, it’s established that Bond is not human, nor should we expect him to be. His prowess with both fighting and women is something that can’t be considered within the range of normal. He is, quite simply, super-human. This is something which is new for series. Previously, Bond had relied on his ingenuity or gadgets. Here, he needs neither, instead gaining the ability to hang on ceilings, see reflections in eyes, or attract women simply by being near them.

Beyond the establishment of Bond as a more concrete stereotype, “Goldfinger” is just a well-made film. The action scenes are tight and relevant, the plot flows quickly from one idea to the next, and despite some plot holes with Goldfinger’s (Gert Fröbe) plans, the movie makes sense and is believable within the universe it has created. Even the racism of the previous films is largely gone, though it does still play host to the idea of a “yellow menace,” and chooses to substitute Americans in as the buffoons. The one-liners are entertaining, Sean Connery’s performance as Bond is as real as ever, and the climax is by far the best of any of the three Bond films I’ve watched. It manages to keep the viewer on the edge of their seat, convinced that Goldfinger has actually won until the very last second.

By all rights, I should be singing “Goldfinger’s” praises, but I can’t. The trouble with “Goldfinger” is the trouble I mentioned earlier. Objectively, this is the best film yet. Objectively, it’s well-made, exciting, and the only one that didn’t have me checking the time at one point or another. It’s fun and action-packed and everything you could hope for in an action film. On a subjective level, though, the trouble lies with Bond and Bond’s character. Much as Bond’s ability to defy his enemies is starting to become super-human, so too is his misogyny. “Goldfinger” has Bond slapping the bottom of a female friend and telling her to run along so he can attend to “man stuff” within the first ten minutes, and doesn’t improve from there. His seductions in this film cannot be described so much as seductions as flat-out invasions or – in the case of Pussy Galore – borderline rape.

But let’s talk about Pussy Galore (Honor Blackman) who – despite being one of my favourite characters in the film – was one of the reasons I looked forward to rewatching this film with dread. She has, on the one hand, the strongest character of the Bond women so far to the point where she is integral on the plot, and can be believed as a person who would act on her own. However, she’s also borderline-raped by Bond in a barn in a scene that the film clearly finds amusing, at least judging by the music. The problem with all of this is not so much that there is sex in the film as it with the idea of sex that takes place out of character, or which is lauded when it shouldn’t be. James Bond is our protagonist, and is meant to place in juxtaposition to Goldfinger, our villainous scoundrel. It’s been established that Bond’s major failings are women and liqueur, but that can’t justify the rape of Pussy Galore. It can’t justify the way he scoffs at the idea of any woman doing anything of value, and it certainly can’t justify his off the cuff remark that Pussy’s change of heart must have been due to the awakening of “motherly urges.”

It’s at this point that I feel obligated to step back and ask myself what my role as a reviewer is with regards to the Bond films. This is meant to be a series about my personal experiences as I rewatch Bond, and if I’m going to be true to that, then I have to concede that I absolutely hate Goldfinger. I hate that the ending is essentially attributed to Pussy finally getting sex from a man, and I hate the misogyny layered throughout the thing. I can recognise that it’s a brilliant film, and definitely a glorious piece of action cinema, but it is not a film I enjoy. It will never be a film I enjoy specifically because of the messages and ideas inherent in it. I can appreciate the film-making and the love that undoubtedly went into it, but that doesn’t make the ethical problems any better, nor does it make them any more watchable. Bond is, quite simply, terrible in this film, and largely unforgivable in his actions.

On an objective level, then, “Goldfinger” is great. It’s a beautiful little action film that presses all the right buttons and gives an excellent show and thrilling ride. On a more personal level, it’s nearly unwatchable. Bond is smug and misogynistic throughout, and while I recognise that he, as always, can’t be expected to be a paragon of progressive thought, the fact that he’s actually regressed to the point of possibly raping a woman suggested very bad things for the character and his future. I want to enjoy Bond films, I really do, but when Bond is actively hating or disparaging entire swaths of humanity, I have a difficult time seeing the appeal, let alone why he’s hailed as a cultural icon. Indeed, the fact that “Goldfinger” is regarded as one of the best Bond films bodes ill for the rest of my journey, though I’ll hold out hope that things will improve over time.

On the whole, I can’t in all honesty recommend “Goldfinger.” I’ll say that it’s good, but unwatchable. It knows what it’s doing, and that somehow makes it worse. It’s morally bad, but a good movie, and this just makes it strange and confusing. Should I, as a reviewer, be focusing on the film-making aspects of “Goldfinger” rather than the ethical ones? Probably, but when the ethical problems are so inherent to the plot, it’s difficult to separate the two. In the end, “Goldfinger” is just contradictory. I want to like it, but I also just can’t bring myself to do it.

Janneke Parrish lives in South Korea where she struggles to order pizzas and consoles herself by watching far too many movies.
You might also like
Bonding with Bondguy hamiltonjames bondsean connery

END_OF_DOCUMENT_TOKEN_TO_BE_REPLACED
Taylor Sinople Picks: The 16 Best Films of 2016
Form and Function in Alex Ross Perry’s “Queen of Earth&...
Digging for Fire and Unexpected: Husband and Wife Process Parenthoo...
Every Thing Will Be Fine 3D Review