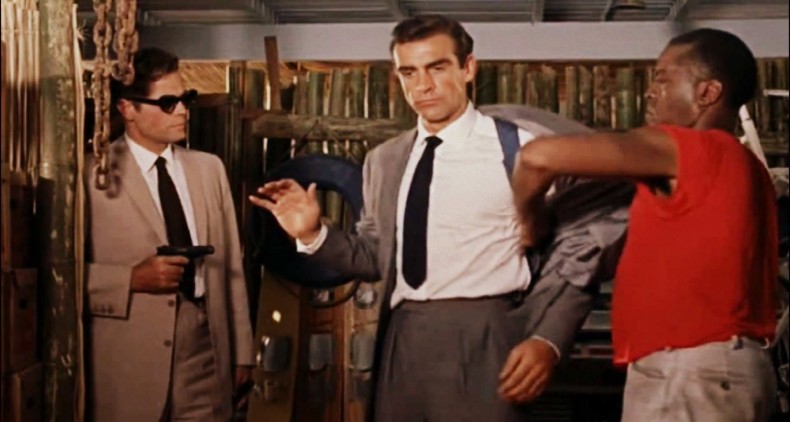 “Dr. No” was released in 1962 and represents the first of the twenty-three Bond films. In it, James Bond (Sean Connery) investigates the deaths of a British secret agent and his secretary in Jamaica, stumbling upon evil villains, tasty drinks, and lovely ladies along the way.

The fact that this is the first of the Bond films shows through in many respects as many of the expected hallmarks of the franchise can’t be found. The opening song, for instance, is nearly non-existent in “Dr. No,” not appearing until the end of the credits, and then, only briefly and as segue into the opening. While it is a fun song, the lack of an opening song is a bit jarring, especially for those only used to later films in the series.

Also absent is the introduction of spy gadgets and the fixation on them. Instead, Bond is left mainly on his own, having to rely on his wits and charisma to solve the particular crisis before him. That said, the film does sometimes focus lovingly on some of his spy tricks – the amount of time the camera lingers on Bond placing a hair on a door feels almost stalkerish – and does seem interested in emphasising that Bond is a spy with super spy skills and super spy knowledge that normal people can only dream of. However, the idea of Bond as a superhero – albeit a more human one than Superman or Spiderman – is one that shows up here. The man isn’t normal – one need look no further than his ability to pick up women with a glance – but abnormal in ways that are potentially believable, at least if you accept that James Bond’s world of villains and spies could exist at all.

“Dr. No” itself is rather enjoyable. At times it feels slow, and the dinner party scene with Dr. No near the end feels almost interminable. However, the mystery is respectably mysterious, and Bond solves it with believable difficulty. The twists and turns keep the audience guessing, and it’s never entirely clear what’s going to happen or where things are going to go next. As an introduction to a series, it’s a good one, and it’s easy to see why this character and his adventures were followed up on.

The most disappointing area of the plot, though, lies in the climax of the film, which feels silent and dull compared to the pumping action that preceded it. Instead of the previous building tension and fights for one’s life, one is instead invited to watch Bond push a button at the appropriate time, then carry the damsel in distress to safety while confused workers stand around conveniently screaming, all dedication to their goals forgotten. It feels almost as though the film expects the tension it has so carefully built to continue through, even when the plot is resolved and all interesting questions answered. It continues with the idea that just seeing Dr. No (Joseph Wiseman) and his plans thwarted is enough of a climax when, in fact, so much more is required.

Indeed, Dr. No as a villain is a bit of a letdown. His initial introduction as a sinister voice sets him up as a man well-versed in how to be a proper villain, but his dinner party invitations and soft speech then set up an entirely different picture. Rather than being terrifying, Dr. No comes off as a version of Mr. Rogers turned villainous after having a cardigan shrunk in the wash. There’s menace in the ideas, yes, but the person delivering them just can’t make them convincing.

Dr. No also raises the delicate question of race and sex in “Dr. No.” Described initially as a Chinese businessman, it’s clear from the character’s first experience that he is not being played by a Chinese actor. This is fair enough – the source stating that he could be a Chinese businessman is not necessarily a reliable one, and Chinese nationality does not necessitate a certain appearance. What’s a bit harder to excuse, though, are lines such as Dr. No having a “cold, callous disregard for human life” because he was from the East are quite a bit harder to ignore. Harder still is a character like Quarrel (John Kitzmiller). Quarrel represents a man who is socially in a subordinate position to Bond, partly because of class, but also because this is Jamaica in the 1960s. The subordinate attitude can be understood to be part of the character. However, showing Quarrel guzzling a jug of alcohol with silly music going in the background raises the question of what the film is trying to show with Quarrel. Are the filmmakers trying to show a character or a caricature? In this case, it’s a fine line, and one that I’m not entirely comfortable with.

Of course, any discussion of ethical problems and James Bond must look at the Bond girl, another famous Bond trope. “Dr. No” has a spectacular and eye-catching introduction of this film’s Bond girl, Honey Ryder (Ursula Andress), showing her mostly nude on a beach, wielding a knife and collecting sea shells. Honey Ryder doesn’t receive much in the way of characterisation, but she’s not expected to. This is a film about Bond, and those around him can be seen as satellites, existing to reflect him without necessarily shedding any light of their own. That said, Andress does a good job striking a balance between a character who is written to be both powerful and helpless. At times, she is a knife-wielding woman, unafraid of going out and hunting seashells on a dragon-infested island, but at others, she becomes helpless and afraid, melting into fear and becoming pliable in Bond’s arms.

It’s not the characterisation of Honey Ryder that’s problematic. The film was made in the 1960s, hardly a bastion of strong female characters. Rather, it’s Bond’s treatment of Honey that strikes the viewer as problematic and outmoded. In his callous assuredness that he knows what’s best, he strips Honey of what little character she does have, and instead makes her a notch in the bedpost. Of course, it’s easy enough to say that this is part of Bond’s character, and most likely it is, but this then raises the question of who Bond is meant to be. Is Bond meant to be a bit of an ass? Or is he meant to be more of a hero? Are we meant to cheer for Bond or inwardly chastise him? Is it possible to do both?

Perhaps the answers to these sorts of questions will become more clear as we get further into the series, though I admit, it’s one of those that will hang in my mind. One would think that a cultural icon would exhibit the traits that we value, but if that’s the case, Bond seems like an interesting choice. Perhaps it is more the case that our icons reflect ourselves and who we are rather than some ideal of who we would like to be, but even then, the perspective poses more than a few difficulties.

In any case, “Dr. No” is a fine film and a fine introduction to James Bond and the series. Though it drags at the end, the buildup and mystery keep the audience connected and interested, waiting for the next surprise and the next adventure.

Janneke Parrish lives in South Korea where she struggles to order pizzas and consoles herself by watching far too many movies.
You might also like
Bonding with Bondjames bond

END_OF_DOCUMENT_TOKEN_TO_BE_REPLACED
Taylor Sinople Picks: The 16 Best Films of 2016
Form and Function in Alex Ross Perry’s “Queen of Earth&...
Digging for Fire and Unexpected: Husband and Wife Process Parenthoo...
Every Thing Will Be Fine 3D Review