Features
0
previous article
Review: Dumb and Dumber To
next article
A Fresh Look At: The Piano Tuner of Earthquakes (2005) 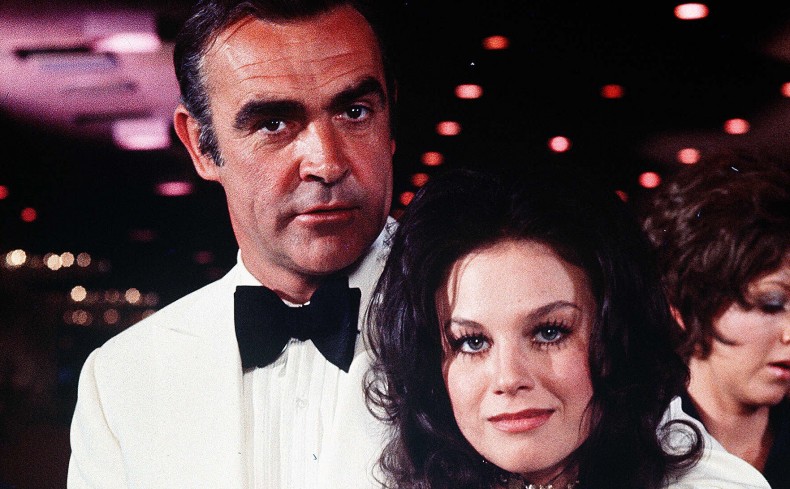 “Diamonds are Forever” shows that Bond, too, can be forever.

It is with a heavy heart that we leave the too-brief era of George Lazenby behind and return to Sean Connery in his final Bond film “Diamonds are Forever.” Reading a bit of background on the film, I learned that Sean Connery had to be paid an obscene amount of money to appear in this film, and it shows. He is an older, fatter Connery, looking not so much like a sex god and secret agent of the 1960s, but rather as an old, tired Bond. It’s clear why this would be Connery’s last Bond film.

“Diamonds are Forever” finds Bond fighting a long series of Blofeld (Charles Gray) doubles, each getting killed in a more gruesome and grotesque way than the last. While an aged Connery is less believable and engaging killing Blofeld clones than in previous Connery films, it’s no less enjoyable, and still more believable than Lazenby’s performance. At points, Bond seems to delight in murdering them and coming up with new and inventive ways to do so, ostensibly under the banner of discovering why Blofeld has been stealing diamonds, but really because I’m pretty sure Bond just likes killing people. Eventually, Bond does discover that Blofeld built a space laser with the diamonds as Blofeld systematically starts destroying the world’s nuclear arsenals. He agrees to stop under the condition that he be paid to spare one country’s arsenal.

It’s a silly plot, made all the sillier by the realisation that if it was money that Blofeld wanted, he could have just used his multitude of diamonds to get that money. However, at some point, it also became abundantly clear that, despite the plot’s perceived prominence, it is not the reason I am watching this film. I’m watching this for the car chases, the shootouts, and the action.

As usual, “Diamonds are Forever” does deliver on action. One car chase through the streets of Las Vegas is particularly memorable for its sheer absurdity and ludicrousness, but really, this only makes it more fun. Bond nearly getting burned to death in a crematorium, too, is an excellent bit of tense action that highlights what makes this series fun.

The absolute high point – and by far the best part – of “Diamonds are Forever,” though, comes from Mr. Kidd (Putter Smith) and Mr. Wint (Bruce Glover), two henchman who follow each other making remarks about the plot and about their thoughts on the various characters in it. The two of them are glorious, and every scene with them is an absolute treat. They are perfect examples of how to add morbid comedy to an action film. While Bond’s one-liners are fun, Kidd and Wint joking and trying to trick people in a way that couldn’t possibly be believed, all while murdering their way through the plot is beautiful. Bringing in two deadpan snarkers into an already comedic film was a move of pure genius.

Really, Mr. Kidd and Mr. Wint raise the question of whether this is, in fact, a parody of a Bond film. Many of the elements are there – the villain that can’t die and keeps randomly reappearing, the mooks that seem too genre-savvy to be real, a Bond girl who is entirely too forward to be a real person, an aged and exhausted Connery struggling through scenes – and in the beginning, it does look like it’s leaning heavily towards the idea of just being a comedy. While it leaves the parody behind (mostly), it still retains so many of these comedic elements that one can’t help but laugh with it over and over.

From the opening song, it’s clear that the dark ending of “On Her Majesty’s Secret Service” has been forgotten and replaced with Shirley Bassey singing about diamonds as if they were a penis. This is not a serious film, nor should it be taken as such. It’s a romp, and it’s an incredibly fun one at that. While it may lack the thrills and excitement of past films like “Goldfinger,” the sheer fun of it more than makes up for that fact. It’s one of the best Bond films so far, and definitely a perfect send-off to Connery’s tenure as 007. It’s a film that makes me optimistic about the future. If I can’t have the action of “Goldfinger,” at least let there be comedy.

Janneke Parrish lives in South Korea where she struggles to order pizzas and consoles herself by watching far too many movies.
You might also like
guy hamiltonsean connery

by Janneke Parrish on December 8, 2014
“The Man with the Golden Gun” probably would have done better with a golden writer.

END_OF_DOCUMENT_TOKEN_TO_BE_REPLACED
Taylor Sinople Picks: The 16 Best Films of 2016
Form and Function in Alex Ross Perry’s “Queen of Earth&...
Digging for Fire and Unexpected: Husband and Wife Process Parenthoo...
Every Thing Will Be Fine 3D Review