Features
2
0
previous article
Review: '71
next article
SNL40: A Look Back at 40 Years of SNL in Film 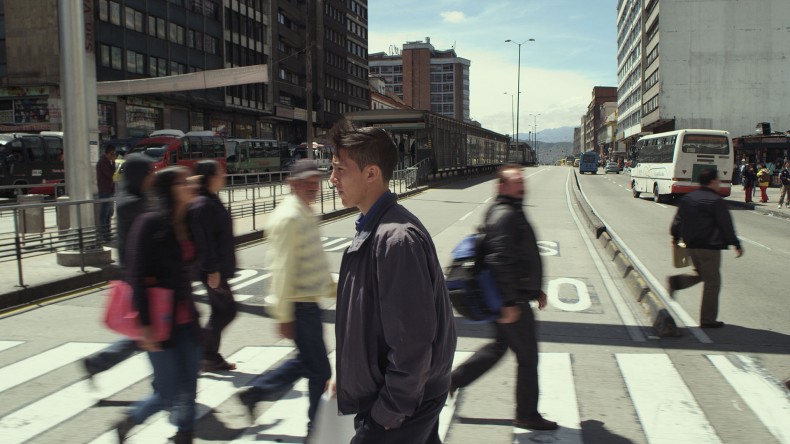 Consisting of 78 minutes, 3 vaguely connected stories, and only 57 shots, Violencia is a strong debut, posing difficult questions and offering roughly zero answers. Not as consistently or directly about violence as its title might suggest, its three stories are all still connected by brief but life-changing instances of violence all highlighting corruption and kidnapping problems in Colombia.

The first third of Violencia follows one day in the life of a kidnapped man, led through the Amazon rainforest in handcuffs and a neck cuff by his captors. The second part follows a high schooler seeking employment, and the third follows a military man from his domestic life to a brutal workplace and back. Each character is given very few lines to speak, yet the acting of all three leads (Rodrigo Vélez,
David Aldana and Nelson Camayo) is profoundly communicative. Void of a non-diegetic soundtrack, careful attention is paid to every drop of rain and every crushing of gravel in the film’s sound design.

As suggested by its grand total of 57 shots, there are a significant number of long takes. Many shots seem somehow simultaneously very concise and meandering. They are shots which transmit a great deal of relevant background information marauding under the guise of useless excess. Every single shot in the film communicates at least one specific detail relating to character details or the grander themes which transcend the individual stories and connect the film as a whole. However, since these details are not highlighted on a macro level, it mostly comes across as unorganized albeit calm chaos.

Ultimately composed of quiet scenes simmering with the promises of violence unfulfilled, Violencia’‘s “raison d’être” is to bring a multifaceted discourse on understanding large, indirect, cultural causes of violence to the table. It’s up to us to dig in.

Maximilien Luc Proctor graduated with a Bachelor’s degree in Film and Media Studies at the University of Oklahoma. In his spare time he plays guitar and sings in a band, as well as watching and making films however and whenever possible – as a one-man-production-team making avant-garde shorts or as a director of a small-scale independent feature productions. He likes what he sees in cinema and wants to celebrate the good stuff whenever possible.
You might also like
Berlinale 2015

by Maximilien Luc Proctor on February 26, 2015
Growing up is never the easiest thing in the world. Growing up a girl can prove especially difficult in certain parts of the world. In Sworn Virgin, that particular part of the world is Albania, and growing up means a struggle to make sense of traditional gender roles. A tale of two sisters, the film […]
Comments
Leave a reply
Add Comment Register

END_OF_DOCUMENT_TOKEN_TO_BE_REPLACED
Taylor Sinople Picks: The 16 Best Films of 2016
Form and Function in Alex Ross Perry’s “Queen of Earth&...
Digging for Fire and Unexpected: Husband and Wife Process Parenthoo...
Every Thing Will Be Fine 3D Review