It is difficult to avoid comparing each new film to the last two or three viewed prior. I am also finding it hard not to repeat certain descriptive terms from review to review. I thought today about my condemnation of everyone else’s own perceived self-importance here, then remembered that I myself am reporting the daily musings of my personal days…

Now at Day Three of the Berlinale 2015, there have been two interesting trends in the films I’ve seen so far which do not apply to every single film, but are still frequent enough to feel noteworthy: main characters that are female and both opening and closing with an identical title card.

Today’s 9am screening was Ixcanul (Volcano), and I made it into the theater about five minutes before the lights went out, finding a spot in the back. It’s odd how different my visual memory is from film to film depending on where I sit in the auditorium. Queen of the Desert looms large and vivid (I sat close) while Ixcanul feels small and far away (I sat far away). It was not an ideal film to watch fresh out of bed and after too-little sleep, but was thoughtfully made and engaging enough to keep me awake. It is an unorthodox coming of age film set in Guatemale about faith, sexuality, death, and communication breakdowns. It is the type of film you’re likely to imagine if I tell you it’s ‘standard art-house fare,’ and I don’t mean that as an insult. As I walked out I heard two critics mention something about symbols and religion in Spanish – exactly what I’d had on my mind, only in English. 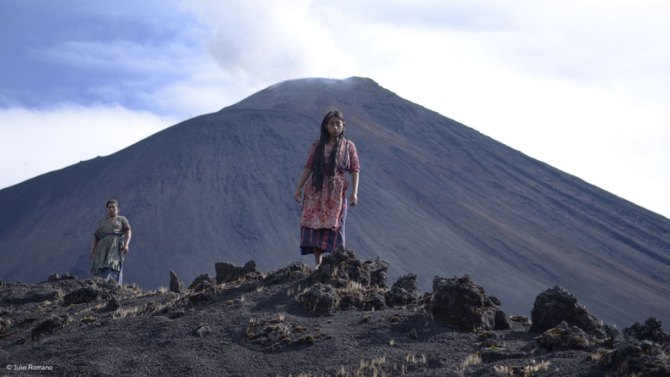 After a short break, next up was Diary of a Chambermaid, the third filmic manifestation of Octave Mirbeau’s 1900 novel (the first two adaptations being the 1946 film by Jean Renoir and the 1964 film by Luis Buñuel). Unfortunately, I went into the screening without having read the novel or having seen either previous film. Fortunately, it meant I had no idea what might happen as the film progressed. In line for Diary, roughly four older critics came and stood next to the already formed line instead of going to the end to wait like all of us privileged enough to have a red piece of plastic dangling around our necks. It was as if they were new here, not yet accustomed to the practice of standing in lines, or seeing films, or caring about non-celebrities. In fact, if this whole festival were itself a film, a top contender for the most prominent theme would have to be impatience. Heck, I’m even guilty of getting impatient with their impatience!

Another trend: films with not only a female lead, but specifically set around the year 1900. I wonder what this strange fixation with that moment in time says about life in 2015.

Diary of a Chambermaid proved mysterious, but a treat. Visually, it’s difficult to think of a moment that wasn’t engaging – both in general appearance and specific presentation. Thematically, there was plenty to chew on. But after it ended, I wasn’t quite sure how to put it all together as a singular message. Maybe that’s the point though; it’s fragmented like a diary.

Like Lea Seydoux as Celestine exclaims twice in the film, I can’t help but think “Holy cow,” when I see today’s brand new issues of Variety and the Hollywood Reporter. Then I remember I probably shouldn’t be quite so surprised as Variety even broke the embargo on Nobody Wants the Night on the first day of the festival. Apparently rules don’t apply to those big enough to break them consequence-free.

The Diary of a Chambermaid press conference was highly under-attended, and I guess I might not have gone either if I’d known in advance that star Lea Seydoux wasn’t going to be there. Director Benoît Jacquot informed us that she had tried everything to make it to Berlin, but couldn’t due to complications on the set of the new James Bond film in London. Jacquot spoke eloquently about his film, calling himself a self-certified cinephile who makes movies to forget his cinephilia rather than reference or think about other movies. He liked both Renoir and Buñuel’s film versions, but still considers each as well as his own to be three very different films. He spoke of not wanting to evoke a lost time or its people by making a film set in 1900, but instead to talk about our own times. He mentioned in passing that he considers acting to be the most important element of a film, and when asked for his opinion about the restriction against filming action films in Paris following the events surrounding Charlie Hebdo, Jacquot wisely noted, “like all police measures, it’s up for discussion.” 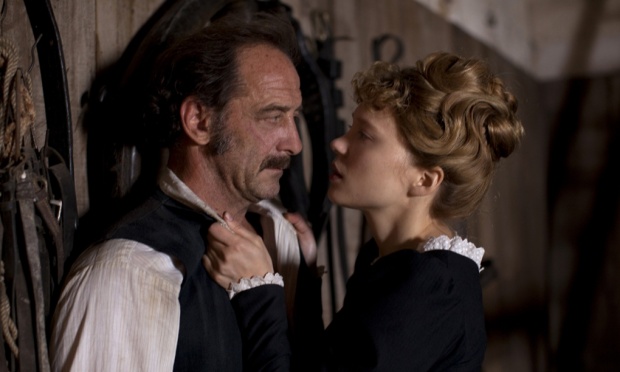 Diary of a Chambermaid

Finally, I finished my film-viewing day with Victoria, a film which I knew was supposed to be one continuous take and nothing more thanks to the posters I’d passed each day which say something like “One Night. One wordIforgot. One Take.” The whole time I was waiting (as well as every time I’d passed the poster during the previous days) I had “Victoria” by the Kinks stuck in my head. As we were let in, the wave or writer pushing to get in first, I felt really bad for a man who got to the front only to be turned away because he was an everyday ticket-holder rather than a member of the press, and as such had been waiting in the wrong line. He had merely seen a line, assumed it was his, and waited. Poor guy.

I find myself continually taken aback by the spots chosen by some lucky enough to enter the theater and choose virtually any seat they want. People sit in some weird spots, but I guess I should be glad they like it there, so that my precious front and center (but not too close or far back) seat is almost always mine for the taking.

Victoria was one hell of a heart-thumping, tense, emotional ride. The two and a half hour feature was – as far as my not-so-trained eyes can tell – truly filmed in a single take. It’s impressive as a technical achievement but more for its mere duration than any real sense of camerawork wonder – it gets awfully shaky and unpleasant to watch in certain spots, and I found myself wondering if maybe it might’ve actually worked better if it hadn’t forced this technical element beyond the breaking point. I found it impactful, if emotionally manipulative. In short, a one-trick-pony I don’t see myself eager to re-visit anytime soon.

I’m looking forward to Every Thing Will Be Fine, but every time I pass the poster with a giant picture of James Franco’s face and the phrase “You want me to crack up a little?” I feel like cracking up a little.

Maximilien Luc Proctor graduated with a Bachelor’s degree in Film and Media Studies at the University of Oklahoma. In his spare time he plays guitar and sings in a band, as well as watching and making films however and whenever possible – as a one-man-production-team making avant-garde shorts or as a director of a small-scale independent feature productions. He likes what he sees in cinema and wants to celebrate the good stuff whenever possible.
You might also like
BerlinaleBerlinale 2015Film FestivalsLéa Seydoux

END_OF_DOCUMENT_TOKEN_TO_BE_REPLACED
Taylor Sinople Picks: The 16 Best Films of 2016
Form and Function in Alex Ross Perry’s “Queen of Earth&...
Digging for Fire and Unexpected: Husband and Wife Process Parenthoo...
Every Thing Will Be Fine 3D Review