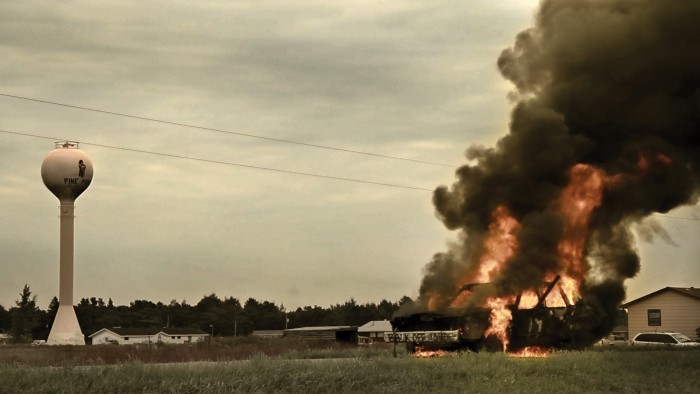 If you’re the type that likes end credit sequences that start with the words “TERRENCE MALICK PRESENTS” set to a Native American rap track, then The Seventh Fire is the documentary you’ve been waiting for. A slice-of-life story about living on the White Earth Reservation in Minnesota, The Seventh Fire slowly reveals the extent to which drug dealing, addiction, and the consequences thereof plague the local community.

Intriguing, visceral, and almost shockingly gritty at times, it is decidedly low budget. Scene after scene is filled with low-light settings captured on inadequate cameras, ringing true to the dark subject matter as scene after scene also captures adults sharing cigarettes with their children in front of a baby, overweight people drinking themselves into violent states of unrest, and teenagers snorting cocaine while they talk about making deals involving meth. Stark and upsetting, it is a dramatic portrait of a reservation in a state of decay.

Almost 18 years of age, Kevin Fineday engages in a number of illegal and narcotics-related activities. His father figure is man now facing a fifth prison sentence. Kevin’s grandfather has resigned himself to living out the rest of his own life in peace rather than spend it worrying about or trying to change the young man. The underlying and unspoken suggestion is that the difficulties on display in the film are the indirect result of a long history of injustice forced upon a specific group of human beings.

As promised by the title, there are plenty of fires both metaphoric and literal. At first inexplicable images of burning objects make appearances in various interludes. Later a woman is shown pouring gasoline on a no longer wanted piece of furniture which she then proceeds to light on fire. In short, this repeated action is a representation of life on the reservation; excessive, worn out, and unwanted.

There was something else quite striking and moderately humorous about the end credits; a closing line which read, “All Rites Reserved.”  Perhaps slyly including the right to undergo a rite of passage into manhood, even if that means making big mistakes before learning things the hard way.

Maximilien Luc Proctor graduated with a Bachelor’s degree in Film and Media Studies at the University of Oklahoma. In his spare time he plays guitar and sings in a band, as well as watching and making films however and whenever possible – as a one-man-production-team making avant-garde shorts or as a director of a small-scale independent feature productions. He likes what he sees in cinema and wants to celebrate the good stuff whenever possible.
You might also like
Berlinale 2015

by Maximilien Luc Proctor on February 26, 2015
Growing up is never the easiest thing in the world. Growing up a girl can prove especially difficult in certain parts of the world. In Sworn Virgin, that particular part of the world is Albania, and growing up means a struggle to make sense of traditional gender roles. A tale of two sisters, the film […]
Comments
Leave a reply
Add Comment Register

END_OF_DOCUMENT_TOKEN_TO_BE_REPLACED
Taylor Sinople Picks: The 16 Best Films of 2016
Form and Function in Alex Ross Perry’s “Queen of Earth&...
Digging for Fire and Unexpected: Husband and Wife Process Parenthoo...
Every Thing Will Be Fine 3D Review