I never thought I would see the day that I would be treated to a Peter Greenaway film in a theater – much less get pushed by a bunch of old people racing to a packed screening of his latest release – but today was that day. The film was Eisenstein in Guanajuato and it was absolutely electric.

However, the first film of the day was Aferim! which, according to the press kit, is Turkish for “well done!” It was a film looking at Romania’s past, a time when gypsies were sold, traded, and abused as slaves – constantly referred to as “crows.” The film is rife with obscenities, often half-yelled by one of the two protagonists; a father and son police team on horseback dead set on finding an escaped slave so that he may be brought to “justice.” It was the first black and white film I have seen at the festival, and the first to truly feel so fittingly old-fashioned. There were repeated notions of traditional masculinity (always sexist), playing the role of the master (always racist), and unfair exchanges. All of this is of course presented with a feeling of “look how awful our ancestors were!” and implies a parallel consideration of “look how awful we are!” Maybe it’s my own fault for being too removed from Romanian culture, but this was a film that didn’t resonant with me personally in a huge way. Its ending is certainly poetically satisfying for what it does to our protagonists’ psyches, but doesn’t warrant the long ride that precedes it. 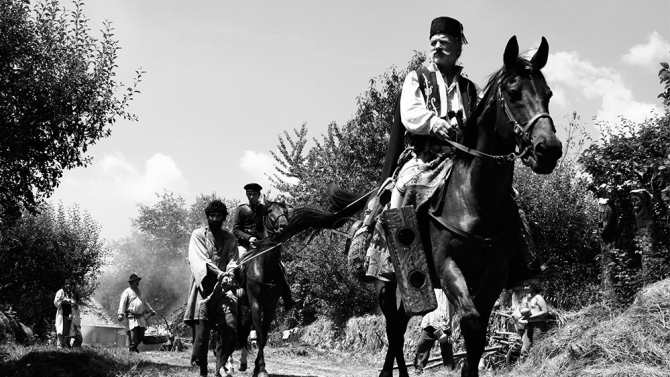 Then came Eisenstein in Guanajuato. It opens with director Peter Greenaway himself reminding us of Soviet director Sergei Eisenstein’s film about the Russian Revolution, Oktober being re-dubbed 10 Days that Shook the World in western parts of the world, and suggesting that his film’s dramatization of Eisenstein’s time spent in Guanajuato, Mexico might also be considered 10 Days that Shook Eisenstein. At the press conference, one critic called it the best film screened at the festival so far – a sentiment I certainly would not disagree with. It was Greenaway’s most accessible, joyful, humorous, and engaging work in years. The performances were excellent.  There is an energy, artificiality, and frankness to it that truly stands out. I’d like to believe that it stands a chance for the Golden Bear, but I won’t be holding my breath. A silver bear for one of the smaller categories is very likely though.

At the press conference, Greenaway was very outspoken; spouting bold claims while his unblinking eyes burned with passion for his art and his fingers clamped into near-fists. He called Sergei Eisenstein the “greatest film director,” whom Greenaway has been studying for all his life, and called Eisenstein’s first film, Strike (made at the young age of 25), the first cinema masterpiece. Greenaway’s long and intricate answers to the questions asked often got him large rounds of applause, for which Greenaway seemed grateful though immodestly expectant. For once (and likely due to my extreme bias for this particular filmmaker), I feel my highlights would not be able to adequately cover the scope of the wealth of material offered in his answers, and so defer any interested parties to the video highlights here:

Finally, having missed the beginning of the next in-competition screening because I stayed for the whole of the Greenaway press conference, I wandered to my favorite theater for out-of-competition films (where I’d seen La Maldad, Queen of Earth, and This Gigantic Furrowing of the Ground) for another perfect-timing random screening. This time I found out what it was before it started. It turned out to be Koza, a Slovakian/Czech film about a former Olympic boxer struggling with poverty and facing imminent financial failure. As straight forward and plain of a set-up as that might sound, Koza is definitely simple but certainly not plain. Succinct in its mere 75 minutes, it is a refined sparse work of stark beauty that will be making a noteworthy impression once it finds a wider audience. 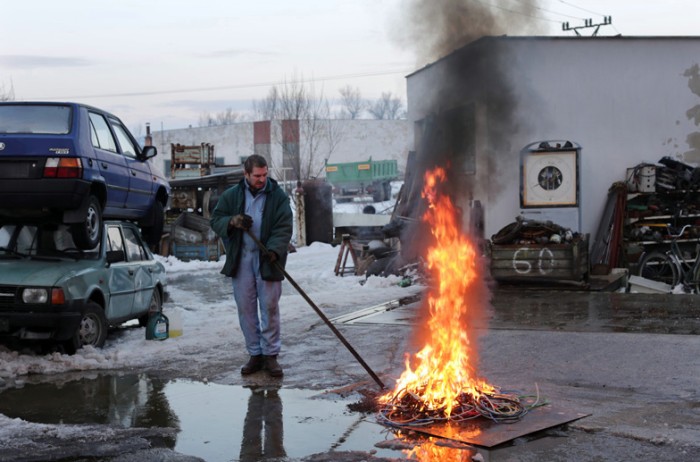 It also featured yet another nosebleed.

Maximilien Luc Proctor graduated with a Bachelor’s degree in Film and Media Studies at the University of Oklahoma. In his spare time he plays guitar and sings in a band, as well as watching and making films however and whenever possible – as a one-man-production-team making avant-garde shorts or as a director of a small-scale independent feature productions. He likes what he sees in cinema and wants to celebrate the good stuff whenever possible.
You might also like
65th BerlinaleBerlinaleBerlinale 2015Eisenstein in Guanajuato

by Maximilien Luc Proctor on February 12, 2015
We are nearing the end of the Berlinale 2015. You can sense it all starting to wind-down and wrap-up. It’s the end of the shoot. It’s been strange, being a part of this enormous, dysfunctional family of critics. Most of all though, it’s just been very inspiring and encouraging to witness so much concentrated love […]
Comments
Leave a reply
Add Comment Register

END_OF_DOCUMENT_TOKEN_TO_BE_REPLACED
Taylor Sinople Picks: The 16 Best Films of 2016
Form and Function in Alex Ross Perry’s “Queen of Earth&...
Digging for Fire and Unexpected: Husband and Wife Process Parenthoo...
Every Thing Will Be Fine 3D Review