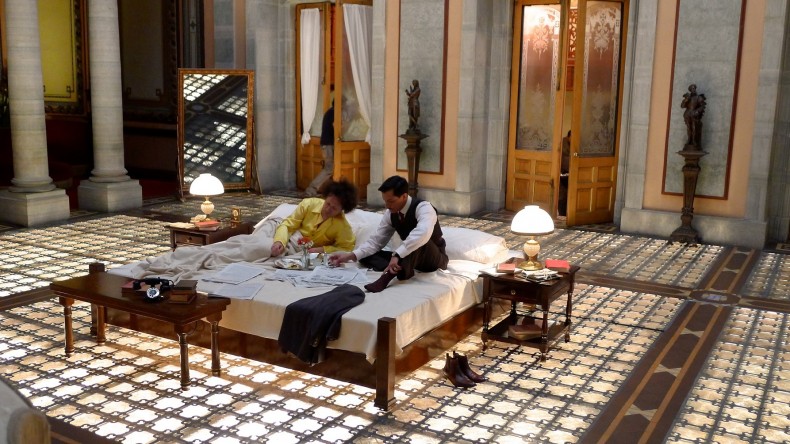 A triumphant return from the annals of obscure near-incomprehensibility for director Peter Greenaway, but still rife with his trademark challenges like nudity, philosophical conversations, and vomit, Eisenstein in Guanajuato is an intellectual treat if you can handle the meat.

A “boxer for the freedom of cinematic expression,” director Peter Greenaway’s imagining of the great Soviet director (and inventor of Soviet Montage) Sergei Eisenstein as brought to life by actor Elmer Bäck is endlessly enthusiastic and alive with electric energy. Bearing an accent similar to that of philosopher Slavoj Žižek, Bäck turns in a joyful performance of an innovative director relating life and revolution. The film opens with Greenaway himself reminding us in voice-over of Eisenstein’s film about the Russian Revolution, Oktober being re-dubbed 10 Days that Shook the World in western parts of the world. He then goes on to suggest that his film’s dramatization of Eisenstein’s time spent in Guanajuato might be considered 10 Days that Shook Eisenstein.

Dramatizing Eisenstein’s 1930 trip to Mexico to shoot what would become the unfinished ¡Que viva México!, Eisenstein in Guanajuato is a celebration of the filmmaker, his ideas, Russian culture, Mexican culture, and variety within cinematic language. A refreshing new work from notoriously challenging British director Peter Greenaway, it is surprisingly comprehensible without letting go of his staples of visual innovation and intellectual dialogue. In fact, the biggest surprise is not even that the film is merely relatable, but even remarkably good-humored. Despite Greenaway’s obsession with what he has dubbed the only two topics – sex and death – his screenplay manages to produce some wonderfully funny quips – such as Eisenstein’s asking whether or not he should over-tip so as to counteract his bourgeois guilt while having his shoes shined.

Containing scene after scene of frank male nudity, the film furthers Greenaway’s effort to normalize elements for cinema which have already been well-established in more classical art mediums. For once, it really works. Beginning with wide-shot scenes of Eisenstein showering upon his arrival in Guanajuato, we are shown a man unashamed to walk around in his natural state. The nudity is later re-contextualized in one of the boldest cinematic depictions of homosexual intercourse yet, by which point the continuous use of nudity no longer feels shocking or special, but just a normal part of human anatomy and interaction. In fact, the film is largely about re-claiming many normal aspects of human existence and cinematic construction from the clutches of taboo.

Eisenstein in Guanjuato truly revels in excitement of being alive, and as such is less of a factual re-telling of Eisenstein’s trip and more of a playful display of filmic communication. Several shots distort architecture through extreme wide lenses and digital manipulation to cartoonish and dazzling effect. Another memorable sequence has the camera following Eisenstein as he rants and walks in a number of rigid dolly shots which perfectly compliment the pillars he passes. Editor Elmer Leupen’s work here is also more than noteworthy, bringing to life a number of super impositions, hidden-cuts, and moments of rapid montage, staying true to Eisenstein’s own editorial ideas.

From start to finish, Eisenstein in Guanajuato is exciting, engaging, and — despite its deliberate artifice — human.

Maximilien Luc Proctor graduated with a Bachelor’s degree in Film and Media Studies at the University of Oklahoma. In his spare time he plays guitar and sings in a band, as well as watching and making films however and whenever possible – as a one-man-production-team making avant-garde shorts or as a director of a small-scale independent feature productions. He likes what he sees in cinema and wants to celebrate the good stuff whenever possible.
You might also like
Berlinale 2015Eisenstein in Guanajuato

END_OF_DOCUMENT_TOKEN_TO_BE_REPLACED
Taylor Sinople Picks: The 16 Best Films of 2016
Form and Function in Alex Ross Perry’s “Queen of Earth&...
Digging for Fire and Unexpected: Husband and Wife Process Parenthoo...
Every Thing Will Be Fine 3D Review