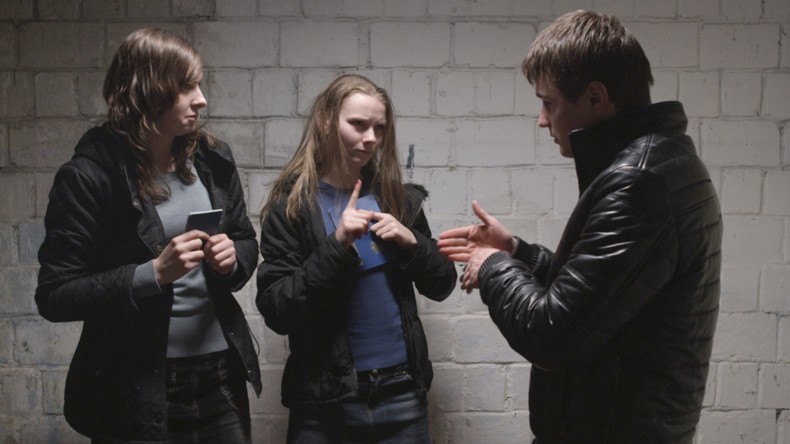 Sorry to disappoint all you vicarious festival attendees out there, but today’s films were pretty conventional stories. First, I saw a relationship movie about desire, the importance of communication, and how all take and no give can start to drive a wedge between two people. After that was a standard gangster flick in which a newcomer shows up and starts to rise through the ranks, but interpersonal politics turn things a bit sour. Theft, murder, and prostitution ensue, as is usually the case with these things. Luckily, those synopses are the only things conventional about their respective films.

The first is Peter Strickland’s dreamy masterpiece “The Duke of Burgundy.” The lovers in question are a butterfly expert and her girlfriend who is quite fond of sadomasochism, a predilection that is starting to strain their relationship. Before the lights went down for the start of this film, I was concerned that I was nearing the point of festival burnout (particularly after my disconnected experience with “The Clouds of Sils Maria” the previous night). From the marvelous opening credit sequence, “The Duke of Burgundy” snapped me back into full-fledged movie mania. Strickland is an aural genius; this film continues to display the sonic mastery he showed off in his previous “Berberian Sound Studio.” With only one day left, it’s a strong contender for my favorite film of the festival.

“The Tribe” is the second film described. Directed by Miroslav Slaboshpitsky, it is a Ukrainian production filmed entirely in sign language with no talking or subtitles. The gang that I mentioned is actually a group of teenagers at a boarding school, which should be painting the crimes listed above in a slightly different light right about now. The misdeeds of the students are captured in impressively long takes that use precise choreography to help provide context to a story that can’t be delivered through dialogue. It’s sort of like “Goodfellas” made up entirely of Copacabana shots. It is a visual feat in every sense of the term, but be forewarned – the film is well aware that it is under close scrutiny and takes that opportunity to shock the viewer with some horrifically graphic scenes.

There were also rave reviews coming out of the screenings I missed out on, from Timothy Spall’s incredible turn in biopic “Mr. Turner,” to the bewitching musical charms of “God Help The Girl,” to the non-stop kinetic force of “Whiplash.”

Zack is a software developer from Halifax, Nova Scotia moonlighting as a cinephile - until the weekend, when those roles reverse. He can often be found thoughtfully stroking his beard or thoughtfully stroking his cat. Despite remaining in the sitting position almost exclusively, he occasionally makes time to be bent into other shapes during jiu jitsu practice. You can aggresively shout your opinions and objections at him via Twitter or in person (anywhere beer is served).
You might also like
AFF