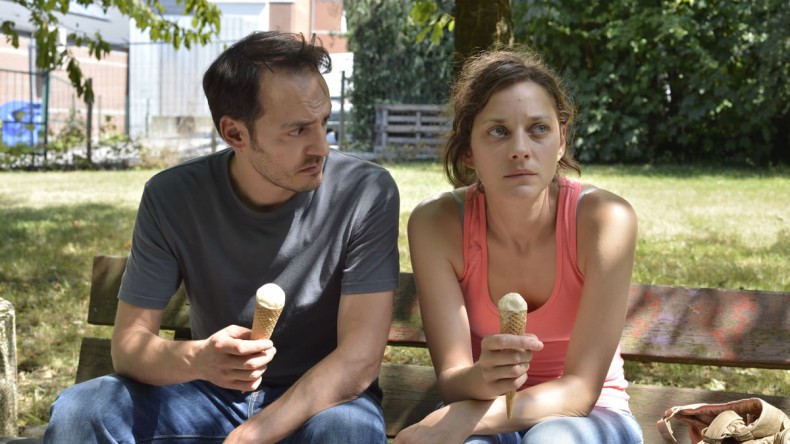 This morning’s first screening was “Tu Dors Nicole,” a meandering and occasionally surreal black & white portrait of aimlessness. It flows parallel to the vein of mumblecore, which has drawn more than the occasional “Frances Ha” comparison. Stéphane LaFleur writes and directs with a bizarre and hilarious sense of humour, and was on hand after the film for a short, bilingual Q&A. The answers from the English segments are transcribed below.

“We shot the film last year, it was 28 days of shooting. It was shot around Montréal. The process of writing was maybe a year and a half; the whole thing was about three years of work. Basically, the film started with the title, ‘Tu Dors Nicole.’ You have to know that – I don’t know about here – in Québec, Nicole is quite an older name. You don’t find girls of that age with that name, so I thought it might be interesting to give that name to a 22-year-old girl. She starts at minus one – she starts her life with a strike, in a way. I wanted to do a film about this period of life: the beginning of your twenties, when you’re not a teenager anymore and you’ve tried mostly everything for the first time, but you’re not an adult totally yet. So the film started like that. My previous film was shot in winter, so I thought it would be a good idea to shoot in the summer. It was cold and, yeah, stupid to shoot in the winter. So that’s the beginning of this film.”

“I grew up mainly in the 80s. My childhood was in the 80s, so I think my cinema is really influenced by that era. Even though [the film] is not a period film, I think you can see in the houses and locations chosen that I’m really inspired by that period.”

“The one-second answer is that I have a band. I’m the singer of a folk band in Montréal, so that may have influenced the fact that there is a lot of music in this film and that there is a band present in the film. I wanted to put a band in a film, but not make a band about a film. I wanted [the band] just to be a character, in a way. There was two soundtracks in the film: the music of the band, and the music that was more the real soundtrack – or maybe our way into the head of the main character – that was made by a band called Organ Mood. There were some Organ Mood songs that already existed before the film and really inspired me while I was writing the script, and I asked the leader of the group to compose more.”

“We tried a lot of stuff with the little guy, because the little schmuck was quite good. He was quite touching, so after the film I was wondering ‘Do I keep his real voice, or do I go for the funny effect?’ But it’s not just a funny effect; I think it’s kind of a sci-fi effect that brings us to the ending of the film and made us accept more at the end of the film. The tricky part with Martin was that I wanted it to be a funny element, but I also wanted us to listen to what he has to say.”

“There is a collection of a lot of ideas through the years that goes in a notebook, and you have to always trust what stays in your head for several months or several years. When ideas keep coming back, well, maybe it’s time to put them somewhere, maybe in a film. It’s a lot of observation, and you need to know that I’m also working as an editor in a parallel life, so I try to build my script a little bit like montage and editing, taking what I like and putting it together as a piece. Sometimes the plot of the film suffers a little bit from that, but you gain another side and that’s what makes the film.”

Between screenings, I dropped in on the awards reception for the festival, where “Cast No Shadow” cleaned up, taking home six awards. The Atlantic-filmed and produced fantasy-drama claimed top honours for screenwriting, cinematography, directing, best actor and actress, and was named Best Atlantic Feature. One of the perks of winning is that the film will now rescreen on the last night of the Festival, before the Closing Gala. I’m quite happy about this since I couldn’t make it during the original timeslot.

Next was the CBC Atlantic Shorts Gala, highlighting a selection of the best short films produced in the region this year. I particularly enjoyed “The Toll” (winner for Best Sound Design at the awards earlier in the day) and “Flankers,” but my favorite was “The Awe of Night.” It uses truly gorgeous time-lapse technique to flaunt the beauty of a region that I’m happy to call home.

“Two Days, One Night” closed out my evening. The latest effort from the Dardenne brothers is an unassuming and minimal tale of adversity, pride, and selflessness. Lead by the inimitable Marion Cotillard, the film lives and dies by her performance – which is to say that it lives. She has two settings at play as she rarely leaves the frame: beautifully tragic and tragically beautiful.

Praise on the festival floor was also high for “Altman,” a documentary about renowned filmmaker Robert; “The Way He Looks,” a Brazilian coming-of-age tale with a blind protagonist; and “20,000 Days on Earth,” the semi-pseudo-narrative documentary about the enigmatic and talented Nick Cave.

Zack is a software developer from Halifax, Nova Scotia moonlighting as a cinephile - until the weekend, when those roles reverse. He can often be found thoughtfully stroking his beard or thoughtfully stroking his cat. Despite remaining in the sitting position almost exclusively, he occasionally makes time to be bent into other shapes during jiu jitsu practice. You can aggresively shout your opinions and objections at him via Twitter or in person (anywhere beer is served).
You might also like
AFFMarion CotillardShort Films