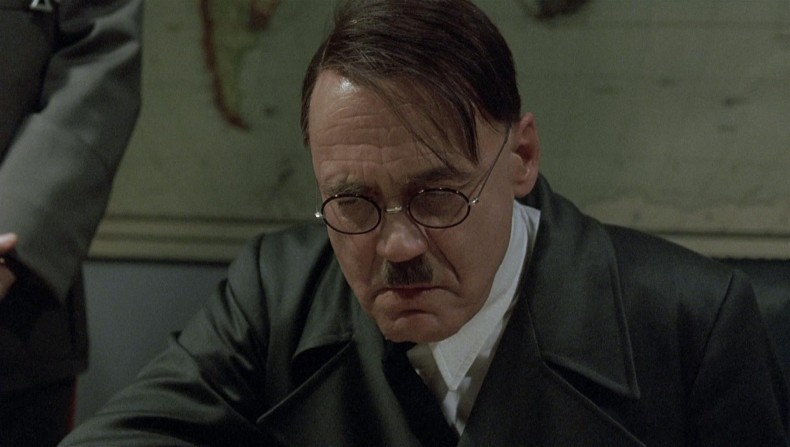 “Der Untergang” – translated into English as “Downfall” – is a 2004 film about the last days of WWII in Berlin. Much of its plot focuses on what goes on in Hitler’s underground bunker, though the story by no means fixates on Hitler. Rather, it drifts to many of the major players in the last days of the war with their relations to Hitler (Bruno Ganz) at the centre. The film does its best to show the surreal nature of the end of the war and the different forms of disbelief that both the German people and the German leadership share. Scenes of lavish parties thrown by Eva Braun (Juliane Koehler) are juxtaposed with scenes of children trying to destroy Soviet tanks as they advance into Berlin. The destruction of the Third Reich and the multitude of death and destruction that accompanies it is shown while Eva Braun and Magda Goebbels (Corinna Harfouch) read out letters about relatively trivial things such as jewellery and what’s to happen with it when they die. Ultimately, the film does show the deaths of the German leadership, and doesn’t shy away from depicting the rash of suicides that accompanied the end of the war and Germany’s surrender.

The film is based on the memoirs of Traudl Junge (Alexandra Maria Lara), Hitler’s secretary and companion in the bunker in the final days. The scenes in the bunker are meant to be through her eyes and based on her experiences. This subjective gives an extra sense of surrealness to the entire affair as it shows not history as an outsider might understand it, but rather, the things that were interesting to her, such as the amount of time Goebbels spent picking over the exact phrasing of his will and the dangers of escaping the Soviet troops. The film is also bookended by an interview with Junge in which she explains her perspective on working with Hitler and how she remembers it.

Ultimately, however, it is this subjective perspective and this attempt to both tell the story of her memoirs and the story of Germany more generally fails to accomplish either. As a film that wants to examine the perspectives of individuals going through the fall of their world, it crowds itself with too many characters and too many perspectives for the audience to be able to relate to the horror of any one perspective. Even Junge’s perspective within the bunker and her views of Hitler, while interesting, are too divided by generals and by things outside her perspective that she couldn’t have seen or known to be helpful in understanding her experiences or indeed the experiences of any one individual person in the final days of the war.

Of course, it could be argued that this isn’t meant to be a film about any one perspective, and that things like the interview with Junge are meant not so much as an addition to her experiences as depicted in the film as they are to be a commentary on Germany and its experiences more generally. This argument fails, though, largely because of the sheer number of characters and the diversity of their experiences. Some experiences are positive, some are highly negative, most are those of very terrified people. The trouble is, though, that if the film’s intent is to tell the story of Germany at the end of the war, then it succeeds no better than Roland Emmerich succeeds in telling the story of the end of the world, and largely for the same reasons. When the film’s intention is to tell an experiential story, yet divides its attention between so many poorly developed characters, it leads the audience to not care when one of these characters who probably doesn’t even have a name kills themselves or is shot by Soviets. One face is the same as any other, and without characterisation, it is difficult for the audience member to tell them apart, let alone care when they die. If the audience can’t care about the characters, it is equally impossible to care about these characters’ experiences or any of their emotions about what is happening to them. They are clearly fictional characters. Why should the audience care about what happens to fictional characters if even those creating the world don’t?

Perhaps the greatest irony of the film, then, is the fact that it is a historical drama. It may be because this is a story that has been told time and time and time again that simply portraying a war is not enough to make the story interesting. The shots of Berlin dying are shots that have been seen before, and “Der Untergang” offers nothing new to this previous conversation. This is a known history, and unless there is a new perspective, it must be asked why this film exists at all.

The film’s saving grace is Bruno Ganz and his portrayal of Adolf Hitler. Ganz does a chillingly good job of bringing to life a megalomaniac realising that the end is near, and there’s nothing he can do to stop it. Ganz shows a Hitler that is every bit as nightmarish as history would want us to believe, but who still loves his dog and his wife, and who is scared of not dying properly. Ganz humanises a monster, and makes the film infinitely more interesting for it.

Juliane Koehler’s portrayal of Eva Braun, too, is a deeply humanising portrayal of an otherwise murky woman. Instead of having her in the sidelines as a woman who happened to love Hitler, it shows her love, and her desperation in the final days. Her lavish parties reveal her own kind of insanity, saying more than history ever could about why and how she married Hitler. Equally, the smaller, more muted moments – such as a conversation with Junge about kicking Blondi, Hitler’s dog – show Braun to be a nuanced character with motives and ideas all her own.

It would have been better for the film had it focused on the bunker and the people in it rather than trying to branch out to the city beyond. These humanised monsters are the most interesting characters and by far the most interesting part of the film, and yet we don’t spend enough time with them. These moments show that this film could offer something new to the conversation about the fall of Berlin and the last days of the war in Germany. On the other hand, though, the film instead elected to try and encompass as much of the city as possible, and in doing so, failed to tell the story of either the bunker or Berlin.

Janneke Parrish lives in South Korea where she struggles to order pizzas and consoles herself by watching far too many movies.
You might also like
Alexandra Maria LaraWorld War II

by Taylor Sinople on September 30, 2013
Formula One World Champion Niki Lauda observes in the opening of “Rush”: “Twenty-five people start Formula One, and each year two die. What kind of person does a job like this?” The answer is what seasoned biopic director Ron Howard (“Apollo 13”, “Frost/Nixon”) spends two hours searching for. Lauda (Daniel Brühl), a strict, calculated German […]
Comments
Leave a reply
Add Comment Register

END_OF_DOCUMENT_TOKEN_TO_BE_REPLACED
Taylor Sinople Picks: The 16 Best Films of 2016
Form and Function in Alex Ross Perry’s “Queen of Earth&...
Digging for Fire and Unexpected: Husband and Wife Process Parenthoo...
Every Thing Will Be Fine 3D Review